When it comes to starting into barefoot running, these words cannot be overstated.

When we change our gait or our moving pattern, from a “bad” one that doesn’t serve us for the long-run to a “good” one or a more natural way of moving, we have to switch slowly, or we’re going to get injured.

This is what we’ve been stating at RunBare.com and for years, wrote about in our book Barefoot Running and in our how-to DVD, and is now the conclusion of Dr. Scott Mullen, a researcher at the University of Kansas Hospital Sports Medicine and Performance Center in Kansas City, who will be presenting his findings this week at the annual meeting of the American Academy of Orthopaedic Surgeons in Las Vegas. 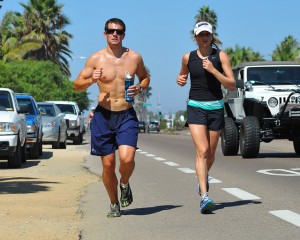 Dr. Mullen explains that in traditional running shoes the heel strikes the ground first. But the focus in the lighter minimalist shoe is to have the forefoot strike first.

In a conventional running shoe, your heel is higher than your forefoot. But a minimalist shoe is flatter, with less drop from the heel to toe.

“They ran barefoot because the minimalist shoes are an attempt to mimic barefoot running in a more protected fashion,”

In looking at runners transitioning to barefoot, a new study found that runners over 30 are slower to transition and therefore stand a greater chance of injury in the process. This makes perfect sense, as the older you are, the longer you’ve developed and cemented a pattern of heel-striking into your neurology.

From a mindful perspective, often the older we are, the less aware we are of our bodies and the feedback it gives us.

Runners were tested at running speeds of 6, 7 and 8 miles per hour for women and 7, 8 and 9 mph for men. As they ran, a camera captured the strike pattern of their feet.

“In adolescents, the amount of heel strike decreased with increasing speed,”

Not so in adults.

That means that older runners who want to transition to the lighter shoes may need more time for their feet to adjust.

With a minimalist shoe, landing on the forefoot allows the foot to naturally dissipate the forces of the foot strike better, Mullen explained. But when people don’t change their foot strike from the heel to the forefoot, this can boost their risk of injuries such as stress fractures.

This is a big reason we at MindfulRunning.org recommend runners start fully barefoot and on the hardest surfaces they can find.

We like to say running barefoot is running awarefoot. It’s a mindfulness exercise in feeling the ground and finding the lightest way to run.

When you run fully barefoot on hard surfaces, that “ouch” you get forces you to find the lightest way to land. 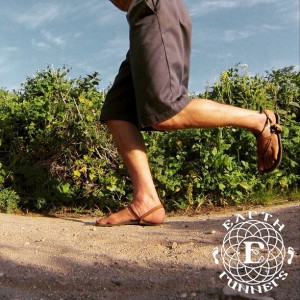 Some runners that want minimal protection opt for huarache sandals such as the Earth Runners pictured here. Copper grommets embedded in the soles aid in literally grounding the runner. Photo credit: Earth Runners via Instagram

Not so in minimalist footwear, as even the thinnest bit of rubber beneath your feet dampens impact, and makes it possible to continue with your old stride, and old habits. That’s a problem no matter the “minimalist” footwear, whether you’re in Vibram Five Fingers, Nike Frees, Altras, New Balance Minimus, Lems, Earth-Runners, Luna sandals, Xero Shoes or any of the others.

If you heel strike in one shoe, you may likely heel-strike in another, but you’re now doing it without any cushioning.

And if you’re new shoes do change your habits, you may have an even bigger challenge. Changing strides requires your muscles, ligaments, tendons, and even bones, adapt to your new movement pattern or gait, and to adapt to new forces.

No matter how “natural” the new stride is, if you haven’t been doing it your entire life, it’s no longer natural to you. This means you need time to change, or you run the risk of serious injury. 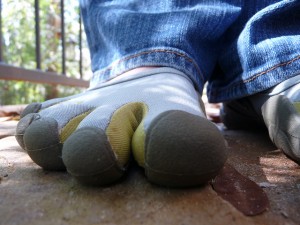 That was a big challenge for many in shoes like the Vibram Five-Fingers. Many people felt so good when they switched to a forefoot stride in their new shoes that they ran for mile after mile with their until weeks or months later when sidelined with everything from plantar fasciitis to stress fractures.

Why? Because they didn’t let their skin be their guide. When one runs fully barefoot on hard surfaces to begin, the skin wears down quickly, humbling a runner and forcing him or her to stop. In essence, the limiting factor becomes one’s skin. If the skin’s tired, the runner has to stop and wait a day or two before running again. Not so in minimalist shoes, where one can instantly transition and run day after day with the new stride; that is, until injury likely stops them in their tracks.

This is an important reason one must begin on a hard surface, fully barefoot, at least for the first few weeks, and preferably for 2-3 months.

One inherent challenge of the study is that runners were analyzed primarily on a treadmill, rather than out on the roads.

A modern treadmill is actually heavily cushioned. It has springs underneath which reduces feedback, making it harder to sense what’s going on. While runners may continue to heel-strike barefoot on a cushioned treadmill, it is nearly impossible to do this on cement. That’s why we’ve long been teaching the harder the surface the better.

However, this doesn’t mitigate the need for proper education when transitioning, starting slowly, and then spending the majority of time back in one’s old shoes, with one’s old gait to begin.

Fieseler agrees that a slower transition to the minimalist shoes is probably best.

According to Dr. Mullen, if you do switch to a lighter barefoot type shoe, experts suggest reducing your mileage, alternating running with walking, and running on level surface. Increase your miles gradually, using the ”10 percent rule” so you up your mileage only 10 percent each week from the week before.

Even before training in the minimalist shoes, wear them to do errands or around the house to get used to them, Mullen said.

“You probably can’t go too slowly” in the transition process, he said.

I couldn’t agree more. Start slowly. Begin with only 100 yards. Then add 100 more every-other-day to begin. And regardless of age, spend the majority of your time in your old shoes, with your old gait, until you’ve made the transition. If you’re not running for speed, this takes about 3 months. If you’re racing at the same time, allow yourself the entire season to fully transition. Changing your gait while working on performance or distance is a formula for disaster.

You need to go slow to keep yourself healthy, and adapt to your “new and improved” more natural stride. Do this, and you’ll feel like a kid again, with springs beneath your feet!

Have fun, be mindful, transition extra-slowly, with barefoot-time first, and run free!

How Steve Jobs Used Mindfulness to Focus His Mind & How You Can Too through...
Scroll to top